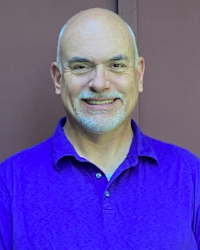 Paul grew up in Roanoke, Virginia, and upon graduating from James Madison University, he began his career in banking, later moving into sales and management jobs. Sensing a calling into ministry, Paul went back to school and earned his master’s of divinity from Southeastern Seminary, after which he spent eight years planting a church and ministering in Montana. God brought Paul back to Virginia in 2015, where he has spent the past five years combining ministry with his secular work. Throughout his career, Paul has used his knack as a handyman to maintain and keep up the facilities under his supervision.

Paul has been married to Christine for over 30 years, and they have three grown children (Chelsea, Jessica and Paul Jr.). Paul and Christine are enjoying “empty nesting” while caring for Walker, their 10-year-old Black Lab. They are enthusiastic supporters of JMU and spend their spare time going to football games, hiking, camping and traveling.