What baseball taught me about Jesus’ call to ‘go’

We were outmatched. Game after game, we just couldn’t get a win. We’d come close – within a point or two – but the losses had piled up, and we were discouraged.

Even though we told the kids that it wasn’t about winning, we coaches knew that a win really would lift their spirits. That’s when one of the coaches hatched a plan. He wondered: What if, when a kid was on first, we had him try to steal second even when the catcher had a clean catch? At this level, getting a kid out at second would be difficult, and with the right runner, we could advance a base and improve our chances of scoring, and thus, winning. 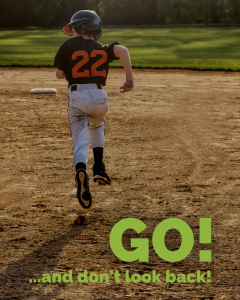 It may sound cutthroat for Little League, but you have to remember: We had played a dozen games and had yet to win any of them.

As the first-base coach, it was my job to tell the player when to steal. They were used to me saying “go” when the pitch went past the catcher, and there was never any hesitation. So we explained our strategy to a few of the kids, and we prepared to give it a try.

Eventually, I caught the eye of the other coach at third base and gave him a knowing look. I was planning to send the runner at first to second, no matter what the pitch.

We tried the play a few more times over the course of a few games, and each time the same thing happened. The kid would hop off first, start toward second and leap back to first as soon as he saw the catcher had the ball. Even though I was clearly instructing them to “go.”

No one wanted to risk it, even though we assured them that it was highly unlikely they’d get
out.

This image – of these back-and-forth runners – has been on my mind as I’ve thought about Jesus’ call for we who follow him to “go.”

After his resurrection, Jesus uses the word in one of the more often quoted passages of scripture: “Go and make disciples of all nations, baptizing them in the name of the Father and of the Son and of the Holy Spirit, and teaching them to obey everything I have commanded you. And surely I am with you always, to the very end of the age,” he says.

The Church, then, should be all about going, about taking Jesus’ message “out there” to people who need Him.

Nona Jones, a pastor in Florida, says it this way: “Somewhere in our history we started to believe the ‘church’ was a location. But when Jesus was assembling his 12 disciples, he told them to ‘come follow me, and I will send you out to fish for people.’ To fish for people requires going out into the deep, but now, instead of going out to fish, the Church has become an aquarium.”

That kind of statement convicts me, and it encourages me to do better, to actually go. But if I’m being honest, I am like those Little League players I coach.

When I told one of the kids about what I wanted him to do, to “go” if I said “go,” no matter what kind of pitch it was, he lit up and was excited about this intriguing idea. But when it came time to do it, he did what everyone else did, sprinting back to the safety of first base.

That’s me. Jesus says, “go,” and I can get excited about it, but then I get a few steps in, and suddenly I’m darting back to first. Because I may not make it. I may look silly doing this strange thing. I may fail. I’m scared, if I’m honest.

In the midst of thinking about all this, I came across a scene in Acts that Paul facing threats and opposition to his telling others about Jesus. But here’s what the Lord tells him: “Do not be afraid; keep on speaking, do not be silent. For I am with you, and no one is going to attack and harm you, because I have many people in this city.”

Much of that encourages me, especially the promise that God is with us. But what also encourages me is when God says “I have many people in this city.”

God says that to us in this time and place, too. He has many people in this city, and some have not yet met Him. That’s why He calls us to “go.”

Again, here’s Nona Jones: “Discipleship requires us to reimagine our role in ministry so that we don’t stop at waiting for people to find us before connecting with them. Discipleship compels us to go find them.”

So, let’s step off the bag and get going.