How a Bible-reading plan can transform your spiritual growth

I have never been a huge fan of Bible-reading plans, those yearlong lists that take you through the entire Bible in a year.

Truth be told, I’ve not been a fan because I’ve been so bad at using them. Year after year, I’d pick one out and then get days and weeks behind in the schedule. Then I’d chuck it for my usual practice of randomly picking a book here or a book there, when I felt like it.

Yeah, I’m not the most disciplined person on the planet, and it showed in my approach to Bible reading, which had become haphazard. 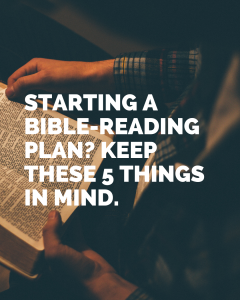 So, as this year dawned, I decided I’d give an annual plan another chance after stumbling upon The Bible Recap, a plan that takes you through the Bible chronologically. Because I had been so disordered in my practice, I liked the idea of the order that came with reading the Bible as a chronological story where I could see the big picture of God’s redemptive work in the world. (I also liked that the plan had a manageable amount of scripture to read each day, which I needed if I was going to succeed.)

Now, as I write this, I am rounding the corner toward Revelation and will soon complete the plan. As a new year is about to start, you may be considering a similar goal. Here are a few things to keep in mind as you get started.

You’ll fall behind or miss a day. I worked to be diligent about reading early in the morning before everyone else woke up and the busyness of the day took over. But there were days when it didn’t happen, and many times throughout the year, I was not on target according to the plan’s schedule. It’s going to happen. So, it was important for me to resolve ahead of time to be OK with falling behind. I’d just pick up where I left off and read some extra entries if I could. I also resolved that even if I didn’t finish in a year, the goal was to commune with God, not to meet a deadline.

You won’t understand everything. The prophets, some of the Old Testament history and some of Paul’s theology were difficult to understand. There were days that only a word or phrase would be my takeaway for the day, and some (the book of Numbers anyone?) when I did not particularly understand anything at all. I determined to be OK with that, to sometimes consult a commentary, but mostly to simply keep persevering and let small phrases or words minister to me. God promises in Isaiah that when His word goes out, it doesn’t come back without achieving some purpose. I may not know what that purpose is; who knows what God is storing up in me even in those inscrutable passages?

You’ll grow in your understanding of the Big Picture. The thing I loved most about the plan I used was, because it was chronological, I got an overview of the grand sweep of redemptive history. I saw the whole story, from the creation and fall of man to the redemption of Jesus and the creation of the Church to the hope of a new world to come. Too often, we read scripture out of the context of this larger narrative, but remembering the big picture is key to understanding who God is, and how expansive and amazing He is.

You’ll make connections. It was fascinating to read something and then later read something else that reminded me of previous readings. For instance, in Paul’s letters, I noticed how often Paul connected growing in knowledge of God to bearing fruit. The goal of knowing God, he says over and over, is to live an obedient, fruitful life – not just gathering information about God. That is just one example, but it’s certainly relevant to the why of scripture reading – not information, but transformation! These connections won’t come every day, but they will come and they will help you identify key themes of scripture.

You’ll build a habit. I needed more structure and discipline in my scripture reading, so I needed a tool to help. This was not easy, though, especially as I began the habit. Now, a year in, my morning routine is developing into something I expect rather than something I do if I feel like it. (Notice I said “is developing” – I am still working on it!) We can despise words like liturgy or habit or routine because we think they aren’t authentic experiences. But that’s a lie that keeps us from the richness of such routines.

What’s next now that I’ve completed this plan? I’m still figuring out what shape my Bible-reading takes in the new year. I don’t want to return to the haphazard ways of the past, so I’ll be incorporating other plans or methods because I need them to keep me focused.

But really, the plan is not the point. The point is knowing and hearing from my Father in heaven. To summarize Paul as he wrote in Colossians, which I read a few weeks ago, I want to be “filled with the knowledge of his will” (scripture) so that I will “walk worthy, bearing fruit in every good work and growing in the knowledge of God.”